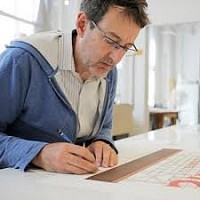 William Steiger explores topics of landscape, architecture and evolvement of the early 20th century in his precisely crafted oil paintings. With his laser-like attention Steiger focuses on the man-made parts notable for their simple and elegant design, those architectural and mechanical pieces of our world that are not only functional and beautiful but also a little nostalgic. This imagery is from deep within a modernism now fading; but, as Steiger makes clear, not quite out of sight as we have led ourselves to believe.

William Steiger was born in 1962. He received a B.A. in Art from the University of California, Santa Cruz and an M.F.A. in painting from Yale University in 1989. Steiger has been a recipient of numerous grants, fellowships, and awards, including The Elizabeth Greenshields Foundation Award, Basil H. Alkazzi Travel Award, London, England, and The Phelps Berdan Memorial Award for Distinction in Painting, Yale University. His work is in the public collections of The Metropolitan Museum of Art, Whitney Museum of American Art, Museum of Modern Art, Savannah College of Art and Design Galleries, and corporate collections of Bank of America, Microsoft Corporation, The Progressive Corporation, and Pfizer Corporation. The artist has an extensive resume and exhibits regularly in New York City.  In the past several years, the artist has also exhibited in New Haven, San Francisco, Atlanta, Chicago, London, Philadelphia, Korea, Cologne, and Santa Fe.  The artist currently lives and works in New York City.