I missed last year's exhibit of early works by Houston abstract painters Richard Stout and Jack Boynton at William Reaves Fine Art, and I've been kicking myself ever since.

Studying that catalog, I thought Stout's best work ranked in the upper tier of what second-generation abstract expressionists put out in their often-overlooked heyday. Reproductions can be deceiving, but 1957, in particular, looked like a magical year... 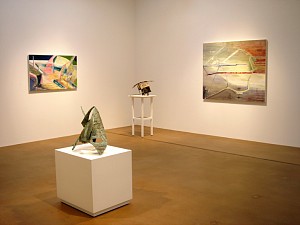 Holly Johnson Gallery in Dallas unveils an exhibition of new works by Texas' most influential artist Richard Stout as well as a selection of his paintings from the 1950s...

For a long time, I could not detect the swallow that would herald a sculptural spring in Houston. The best artists always emigrated; some gave excuses - no propitious climate, no inspiring culture, no public understanding...