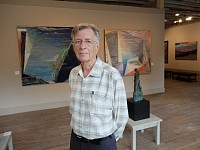 Richard Stout has been a working artist for over fifty years, and is one of Texas’ most widely admired contemporary artists. His works bring a new perspective to the familiar, allowing the viewer to interpret the mystery and abstraction of the subject matter. His work provokes emotions like loss and uncertainty, but is balanced with feelings of reassurance and inspiration. Stout works mainly from direct observation, beginning many of his paintings plein air, and starting his sculptures from organic forms.

Stout was born in 1934 in Beaumont, Texas. He began his formal art training in the 1950’s at the Academy of Art in Cincinnati and at the Art Institute of Chicago where he received a B.F.A. degree in 1957. Stout then earned an M.F.A. from The University of Texas, Austin, in 1969. For over twenty years, he served on the faculty of the University of Houston as a professor of painting, helping to establish the highest standards of art instruction in the region. In 2004 Stout was named “Texas Artist of the Year” by the Art League of Houston and in 2010 received a Lifetime Achievement Award from The Center of Advancement and Study of Early Texas Art. As early as 1951, Stout’s work appeared in group shows, and his one-person exhibitions span nearly five decades, from 1958 to the present. In the years since his first solo exhibition, Mr. Stout’s work has been exhibited throughout Texas, across the United States, as well as abroad in Norway, Germany, Iran, Shanghai, and Switzerland. His work is in various museum collections, including The Art Museum of Southeast Texas in Beaumont; Butler Institute of Art in Youngstown; Huntington Gallery at the University of Texas in Austin; Kupferstichkaabinett, Museum of Fine Art in Dresden; The McNay Museum in San Antonio; The Menil Collection in Houston; Museum of Fine Arts, Houston; and many private collections