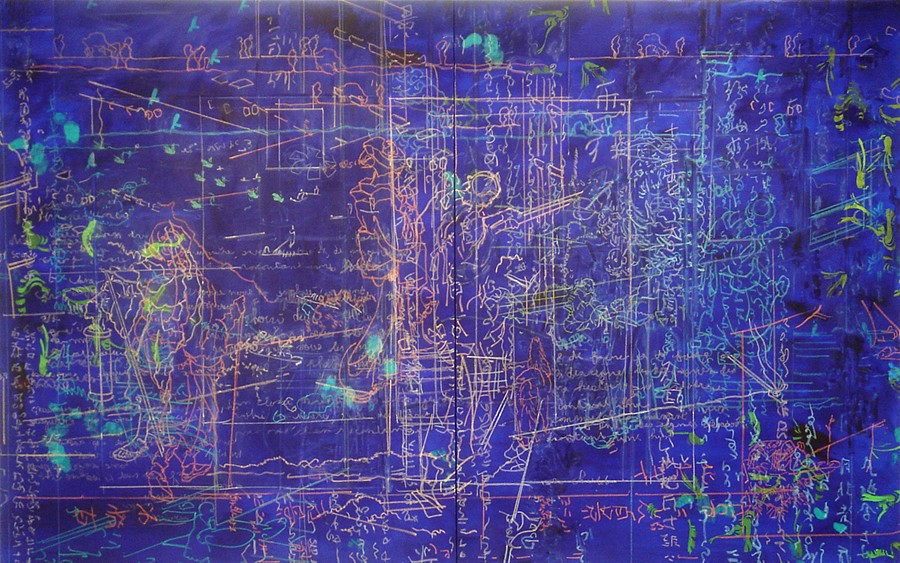 Holly Johnson Gallery in Dallas, Texas is pleased to announce the opening of New Paintings and Drawings by painter Gael Stack.  A reception for the artist will be held on Friday, October 21, from 6:00 to 8:00 p.m. The exhibition continues through November 26, 2005.

A consistent ground, dominated by cobalt blue, has played an important role in Stack’s work for well over a decade. It has become a neutral color on which to make marks – marks specifically blurring distinctions between writing, drawing, and painting. In these new multi-layered narratives, the artist continues to examine the phenomenon of memory. Heavily worked surfaces attest to the process of painting while fragmentary texts and images evoke the notations and devices we use to remind ourselves of past events and future commitments. Composed of calligraphic strokes, Gael Stack’s works are like pages from a diary rendered in pictographs and amplified with color, tonality, and the implication of movement.

In the 1970’s, Stack received a BFA from the University of Illinois in Urbana and a MFA from Southern Illinois University in Carbondale.  Her work has appeared in numerous national and international group exhibitions such as the Contemporary Arts Museum’s, Perspectives @ 25: A Quarter Century of New Art in Houston (2005), Texas Vision: The Barrett Collection at SMU’s Meadows Museum in Dallas (2004), Establishment and Revelations at what is now the Dallas Center for Contemporary Art (1997), and Three Visions which originated at Centro Cultural Borges in Buenos Aires, Argentina (1996). Numerous solo exhibitions include: Musée des Beaux Arts, L'Echevinage, Saintes, France (1995), Musée de Niort, France (1996), and Gael Stack: A Survey 1974 – 1989 at the Dallas Museum of Art (1989).

She has received a Cultural Arts Council of Houston Award for Visual Arts, two grants from the National Endowment for the Arts, a Tiffany Foundation Grant, and was named 1997 Texas Artist of the Year by the Art League of Houston. She has been a visiting distinguished professor at Yale University in New Haven and is currently the John & Rebecca Moores Professor of Art at the University of Houston where she has been a faculty member since 1980.