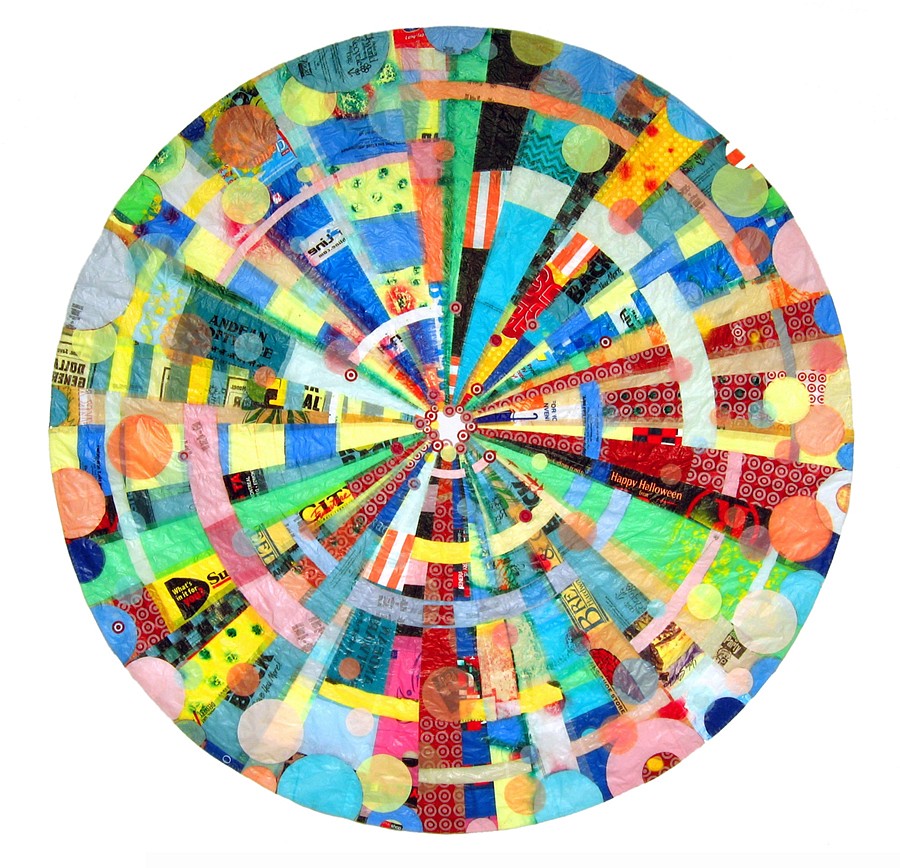 Holly Johnson Gallery in Dallas is pleased to announce the opening of, Virginia Fleck: Consumed, an exhibition of recent mandala collages by the Austin based artist. A reception for the artist will be held Saturday, February 19th, from 6:00 to 8:00 p.m. The exhibit continues through March 26th.

Virginia Fleck’s mandalas are intricately crafted, large-scaled works that reference painting, but are created by collaging pieces of detritus from a consumerist society in a way that exposes the efforts of advertisers to influence the masses. The results, each crafted from thousands of pieces of used plastic bags imprinted with familiar logos and slogans can be both humorous and unnerving.  These large ebullient mandalas are a manic explosion of consumerist excess that contain and brand our passions while attesting to our belief in the American Dream.

Fleck’s work has been exhibited at Art Forum Berlin, Pulse Miami, Pulse New York, and Arte Fiera in Bologna, Italy. She has been the recipient of numerous grants and residencies including a fellowship for a residency and exhibition in Havana, Cuba. In 2007, she was nominated for the Texas Prize, and won the juror's award for the 2007 Texas Biennial.

Ms. Fleck has been commissioned for both temporary and permanent public art projects throughout the United States. She recently completed The Spin Cycle for Whole Foods World Headquarters and Mandala Constellation for the Dell Children's Hospital, both in Austin TX. Her work appears in many prestigious collections including the Marino Golinelli collection in Bologna, Italy.

Virginia Fleck was born in New York City in 1960. She studied at Portland School of Art and The School of the Museum of Fine Arts in Boston. In 1990, Ms. Fleck moved to Austin, Texas, where she continues her work as a visual artist.