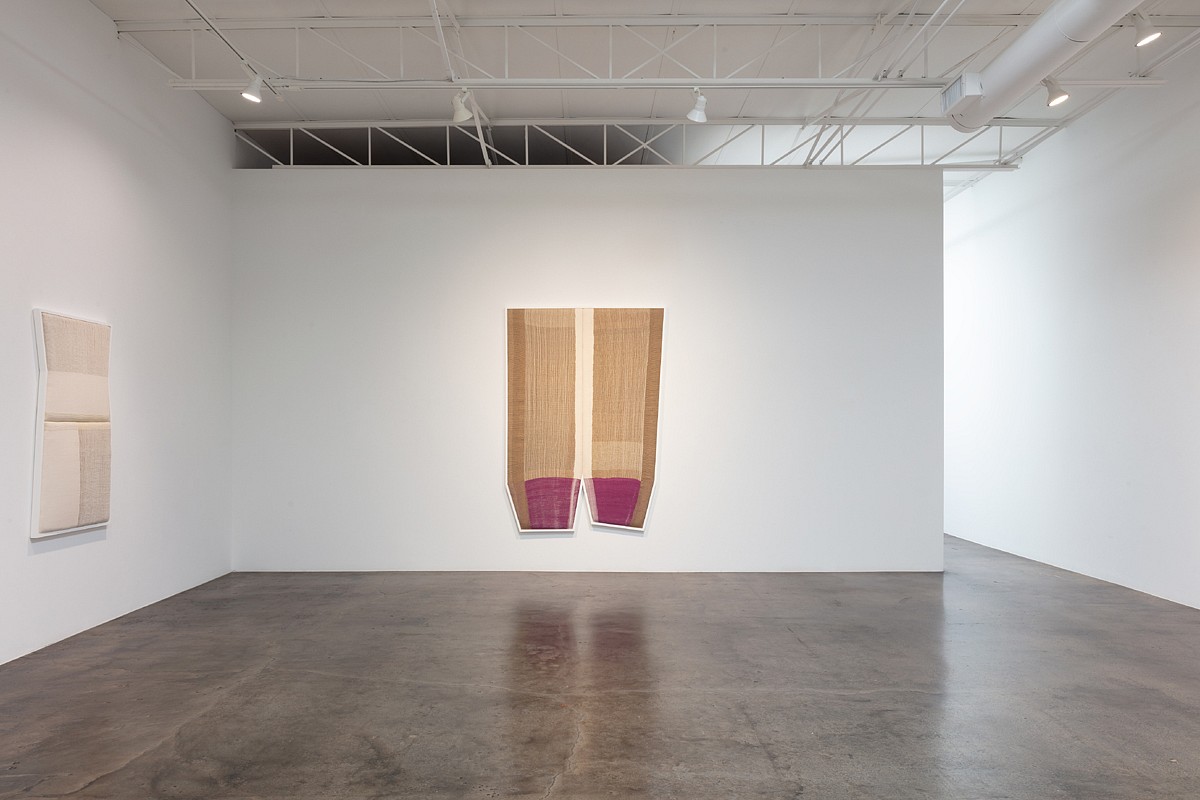 Holly Johnson Gallery is pleased to announce the opening of Ana Esteve Llorens: Possibility of Line, an exhibition of woven textiles created over the past two years. The exhibition opens with a reception on Saturday, May 21 from 5-8 p.m.

Possibility of Line, premiers the first investigation dedicated to what the artist calls “spatial weavings.” In 2015 the artist started to work with yarns and weaving techniques encountered while living and traveling throughout Mexico and combining them with those of her native Spain. Since then, she has continued to research and enact the sculptural possibilities of fibers.

Possibility of Line expands on the expressive and spatial potential of textiles, taking the intimacy of what is hand-crafted to a sculptural scale. These works are woven on a backstrap loom, a traditional method of textile production that starts defining dimensions and densities of threads, that is, length and width of warp.

Research of materials often linked to distant times and geographies play a crucial role in her projects. Revising ancient artisanal techniques and interlacing them with sculptural processes, Esteve Llorens composes works that defy the formal and conceptual notions of origin and belonging, contrasting nature with culture.

Pigments are the result of an investigation of the history of natural dyes and an exploration of native and invasive plants, seeds, and insects growing in the surrounding places. She manually extracts by grinding and boiling substances - shades of purple derive from Cochineal insect parasites living in pricky pear cacti in the Texan desert, while yellows are obtained from Zacatlaxcalli, a parasitic vine growing in the Central Mexican Plateau.

Weaving becomes an active way of thinking. Aware of the oeuvre of key figures in the history of art and design, such as Anni Albers, Florence Knoll, and Jackie Winsor, among others, and simultaneously making with body and mind, Esteve Llorens challenges the modern precepts that defined abstraction at the beginning of the twentieth century. A set of predefined rules and a projected geometric shape contrasts with an organic, flexible outcome.

Ana Esteve Llorens was born in Valencia, Spain and has been living, intermittently, between Spain and the United States since 2005. She holds a Master of Fine Arts in Sculpture and Extended Media from VCU-Virginia Commonwealth University (2011), and a Master of Arts (2010) and a B.A. (2007) from Polytechnic University of Valencia, Spain. Prior to her career in art, she was trained as an Engineer and received a Telecommunication degree from Higher Polytechnic School of Gandía, Spain (1998), specializing in Image and Sound.

Esteve Llorens has been the recipient of numerous awards and fellowships including a Fulbright Fellowship (2009-2011), an Excellence award from AMEXCID (2014-2015), and Fellowship from Arte y Derecho Foundation. Her work has been shown in Europe and in The Americas. She has been an artist in residence at Yaddo in New York, The French Academy in Madrid, and The National Institute of Fine Arts in Mexico City, among others. She currently teaches at Southwestern University, Georgetown, TX and lives between Austin, Valencia, and Mexico City.