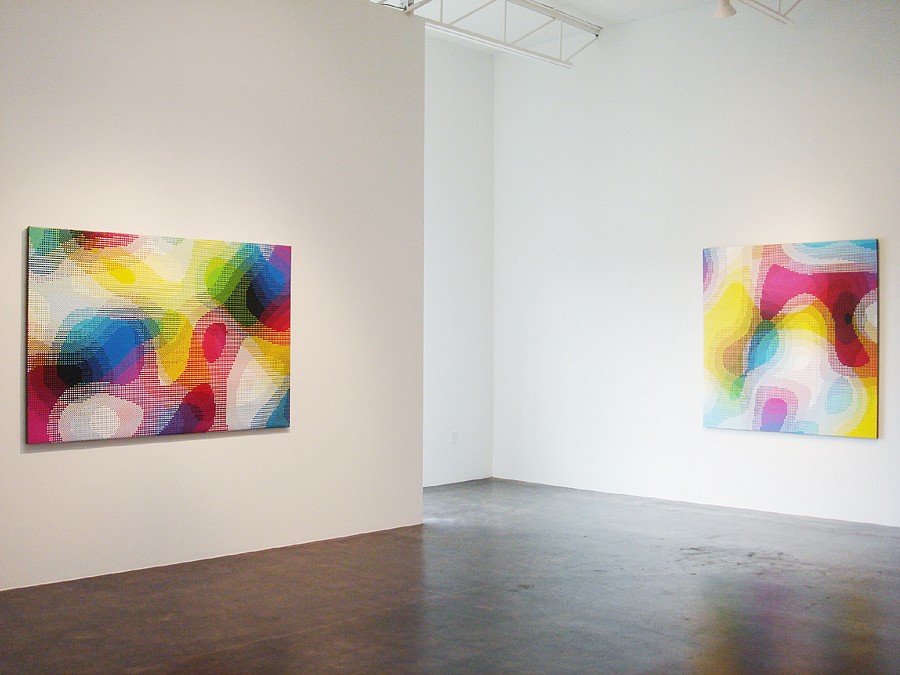 Holly Johnson Gallery is pleased to announce the opening of, William Betts: COLOR SPACE, an exhibition of new paintings by the Miami-based artist. An opening reception will be held April 1st from 5-8 p.m. The exhibition continues through June 17.

William Betts studio practice has always veered back-and-forth between representation and non-objective painting. While working with photographic and video based imagery, he became increasingly interested in how software and systems translated and rationalized pictorial information and started exploring these nuances and the possibilities of the technology as an aesthetic generator. The COLOR SPACE paintings are a visual representation of a technology process. The artist uses color and varying degrees of transparency to create the picture. The free-form shapes used to create the space provide a contrast to the uniformity and consistency of the patterning used to render the color transitions.”

Since 2001, Betts has focused his practice on software-controlled processes he developed for applying paint. Using digital technology and industrial processes Betts produces paintings that are both visually captivating and technically innovative, reflecting on the possibilities for an analog medium in a digital age. Though automated, the technique is exacting and time consuming and any given painting may contain up to 100,000 individually applied drops of paint.

Claudia Schmuckli stated in 2008, "Unlike other artists of his generation who have incorporated painting machines into their work to signal their critical or ironic engagement with the history of the medium and the role of the artist, Betts embraces the machine as the only tool that will produce the aesthetic and quantitative results he is after."

Betts was born in New York City. In 1991 he graduated from Arizona State University Cum Laude with a Bachelor of Arts degree. His work has been included in numerous exhibitions throughout the U.S. and recently at DOX Centre for Contemporary Art, Praha, Czech Republic and in Rasterfahndung (Tracing the Grid), Kunstmuseum Stuttgart, Germany. He was selected by 1800 Tequila for their Essential Artists series (2013), New American Paintings' Second Annual Prize (2012), First Place at the Assistance League of Houston Celebrates Texas Art (2008), a Hunting Art Prize finalist (2007 & 2010), Best in Show in the Biennial Southwest at the Albuquerque Museum (2006), and included in the Texas Biennial in Austin (2005 & 2007).