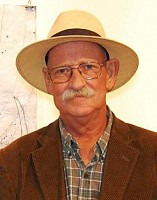 The prolific career of Virgil Grotfeldt (1948-2009) focuses on his exploration of the mysterious bond that connects all elements. In 1997, the artist wrote: “Consideration and study of elements that converged to compose planet earth is of infinite interest to me, especially within the context of the evolution of life, culture, and belief systems. The anthropological, sociological, and geological composition of our world is my source of truth.” With imagery often slightly beyond ones’ grasp and constantly on the verge of physical transformation, Grotfeldt’s work developed intuitively, rather than as a consequence of planning or strategy. His work was influenced by the artist Joseph Beuys yet was also deeply expressionistic with affinities to Odilon Redon and the paintings of Victor Hugo.His work of the past twenty years is executed with experimental materials such as coal dust on found ledger pages, nautical maps, architectural plans, and pages of Braille text. Suspended in an aqueous-based medium, the coal dust is drawn, brushed, and combined with watercolor and oil paint to conceive extraordinary forms giving his work a unique three-dimensional aspect.

Born in Illinois, Virgil Grotfeldt had a prolific and internationally recognized career. He received degrees from Eastern Illinois University and the Tyler School of Art in Philadelphia and held a number of teaching positions at schools in Illinois and Texas – most recently at Houston Baptist University. He was the recipient of many prestigious awards such as Texas Artist of the Year 2003 by the Art League Houston, a grant from the Pollock-Krasner Foundation in 1999 and The Engelhard Award in 1991. His work resides in many private and public collections, including The Menil Collection, Houston, Texas; Whitney Museum of American Art, New York, New York; NOG Insurance Company, Amsterdam, The Netherlands; Free International University World Art Collection, Zeist, The Netherlands; Museum of Fine Arts, Houston, Texas; Dallas Museum of Art, El Paso Museum of Art, Tyler Museum of Art, Tyler, Texas; and Upriver Gallery Collection, Chengdu, China.