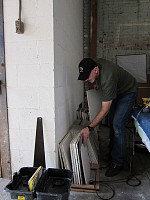 Taking an approach which may vary in formal terms but stems from a common concept, his art work begins with a solitary affection, however slight it may be, that opens to a spectrum of reference using an initial gesture, an imprint, and the forensic properties of plaster as a medium of empathy and mimesis. His interest in the materialization of textual metaphor through casting and monotypes forms His studio practice. Along with these media, Buss employs photographs and drawings to investigate his interest in the onset of the image through traces (impressions, marks, residue, remains); through evocative, telling images impressed on the senses or the mind by way of indistinct or imprecise notions or remembrances; and through the banality of a space.