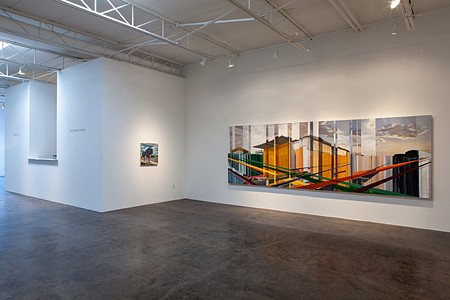 Holly Johnson Gallery is pleased to announce the opening of Kim Cadmus Owens: Purposely Distorted for Clarity on January 17th, from 6:00 - 8:00 pm. The exhibit features new paintings and a suite of letterpress prints on view through March 28.

Owens is inspired by nostalgic imagery reflecting decades of redevelopment - a mid-century bank, a roadside motel, deco-era signage and a city block's facade. Through shifts in color palette, perspective and composition, Owens un-tethers this imagery of structures, signs and words from the past and creates new meaning and significance that speaks to the future. Owens' work examines the effects of digital technology on our environment. Whereas most see interruptions of this technology as an inconvenience, Owens sees it as an opportunity to explore the complex and hyper-visual nature of this new techno-mediated reality. Using a computer to convert and process imagery, the artist turns the visual evidence of the digital into a formal language, exposing the images encoding to reveal its inherent abstractions.

Owens' work has been exhibited nationally at venues such as the Crystal Bridges Museum of American Art, Corcoran Gallery in Washington DC, Islip Art Museum in New York as well as numerous galleries.  Her work has been featured in the book Texas Artists Today published by Marquand Press, New American Paintings #102 and #78, and reviewed in various publications including ARTnews.

Born and raised in Texas, Owens moved to Dallas in 2006 after having lived on the East and West Coasts as well as Japan. She received her MFA in Art from Towson University near Baltimore, MD, and her BFA in Painting and Drawing from the San Francisco Art Institute in San Francisco, CA.

Owens works on a variety of projects related to her varied interests that involve her community and environment. She has created art and designs as Station Artist for the DART Light Rail Orange Line station at the Las Colinas Urban Center. She often works with Lilco on a variety of projects with her Partner Lily Smith-Kirkley. She resides in Dallas and is Associate Professor of Art in Painting at the University of Dallas.

Holly Johnson Gallery recently moved and is now located at 1845 Levee St #100 in the Dallas Design District. Gallery hours are 11 am to 5 pm, Tuesday - Saturday and by appointment. For information call 214-369-0169 or email info@hollyjohnsongallery.com.